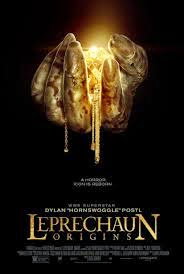 Another one! This is set in Ireland where four tourists visit and get sacrificed to a little monster. They escape and go on the run trying to survive. It's mostly set at night, is fast paced, but isn't scary at all. There's one good scene where they accidentally kill one of their own. This monster appears different to the others in the series, more deformed. The story involves a mine that has gold extracted and the leprechaun wants it back.

at January 22, 2015 No comments:
Email ThisBlogThis!Share to TwitterShare to FacebookShare to Pinterest
Labels: 'leprechaun origins'

It's the biggest crisis in Irish cinema since Kirsten Sheridan ceased being a member of our Film Board! Not only has RTÉ refused funding for this year's event but now the IFB is also considering the same. This is a total disgrace! What other organisation would nominate masterpieces like Shrooms and Trouble with sex? What will we do without these IFTAs? This event fills about three pages on this blog alone. Where else can Amy Huberman stand behind our President and wink at someone off-screen? Where else can Saoirse Ronan's dad say "she's having a curry"? The IFTAs do the exact same as most Irish movies do: bad camera work, terrible sound, bad dialogue, and ugly women. That Nordie short that got an Oscar nomination today: you can be damn sure that it would NEVER have received an IFTA nomination. Because the IFTAs doesn't worry about silly stuff like quality. For the sake of Irish cinema please save our IFTAs!

at January 15, 2015 No comments:
Email ThisBlogThis!Share to TwitterShare to FacebookShare to Pinterest
Labels: 'save our iftas'

Probably the weakest year so far this decade for Irish cinema releases. Some titles got screened exclusively outside of Dublin but made little impact. Here's a rundown of what I saw:

GOOD
Noble - impressive biopic that didn't do as well as it should have.

Food guide to love - another release that no-one noticed. Set in Dublin it eventually ran out of steam but is enjoyable enough.

What if - OK romcom with a bit of intelligence, partly set in Dublin.

Songs for Amy - how many Irish romance movies got released this year? Set in Galway, this is one of the better ones.

Out of here - middle-class rubbish about an art-school drop out. As dull as it sounds.

Gold - the most inept title for an Irish movie since Sensation. 'Turd' would have been a better title.

A nightingale falling - another Big House movie but without the quality actors and Protestant outlook.

Mrs Brown's boys d'movie - TV adaptation comedy that fails to match older ones from the 1970s.

Frank - another overrated release from this director. Full of horrible characters and even worse music.

Run & jump - imagine if someone made a movie about how a man copes married to a disabled woman? That wouldn't be acceptable. Here's one with the roles reversed and it was about as original as that selfie its director posed for at the IFTAs!

Calvary - church bashers at it again in the most subtle of ways. Gleeson won't be smirking in a few years when no-one remember his movies!

Sea - if I wanted to get funding from our Film Board this is the kind of crap I would use. Exactly the kind of stuff that soaks up funding yet no-one really is impressed with the finished result.

Stag - it's one thing to copy obscure movies but here in Ireland we do it a little different. Yes, lets copy recent box-office hits from the States. Singer Rocky DeValera had more originality than this rubbish. Amy Huberman's in it too, enough said.

Stalker - seriously, this is just sh-t. There's a reason certain films don't get made and it's not because Irish directors don't have the 'balls' or whatever rubbish that FIS document states. About as subtle as Louis Walsh voting for Irish acts on the X-factor.

at January 04, 2015 No comments:
Email ThisBlogThis!Share to TwitterShare to FacebookShare to Pinterest
Labels: 'the good, and the rubbish of 2014', the average
Newer Posts Older Posts Home
Subscribe to: Posts (Atom)

Master of the world

Dated movie from the 1960s with Vincent Price trying to stop wars around the world. He uses an airship to attack from the sky. A group of ...